r5535
to infinity and beyond
Top

Now need to get built version of Netsurf

This is how Netsurf on KolibriOS looks right now: 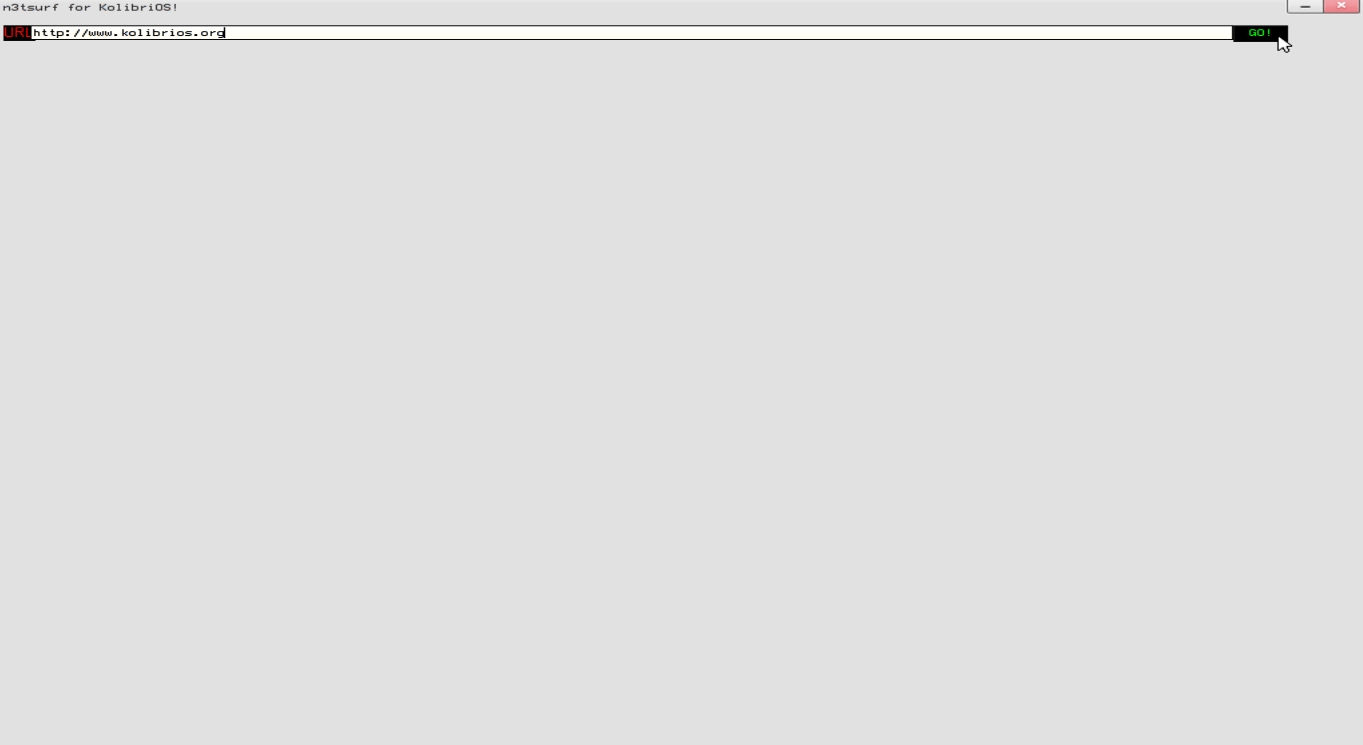 This is completely written in FASM and uses elements of _only_ boxlib so far. I will add elements of libimg (and libio for reading images/graphics) and then the blank working area should serve as the display region for netsurf's content. If anyone has any GUI related feedback, feel free to shout it out and I'll try to incorporate it into the main release.

PS - If some one has any suggestions on which drawing library to use to show the rendered content of an HTML page, please suggest and I will try to use one of those libraries. I am hoping to find something which is fast for KolibriOS. Currently, libimg seems like the only contender.
---
Check out the Netsurf Web Browser for KolibriOS.
Read the wiki and happy hacking with KolibriOS!
Top

Thank you for the icon set , Leency. I've used them in the GUI and have this for now. 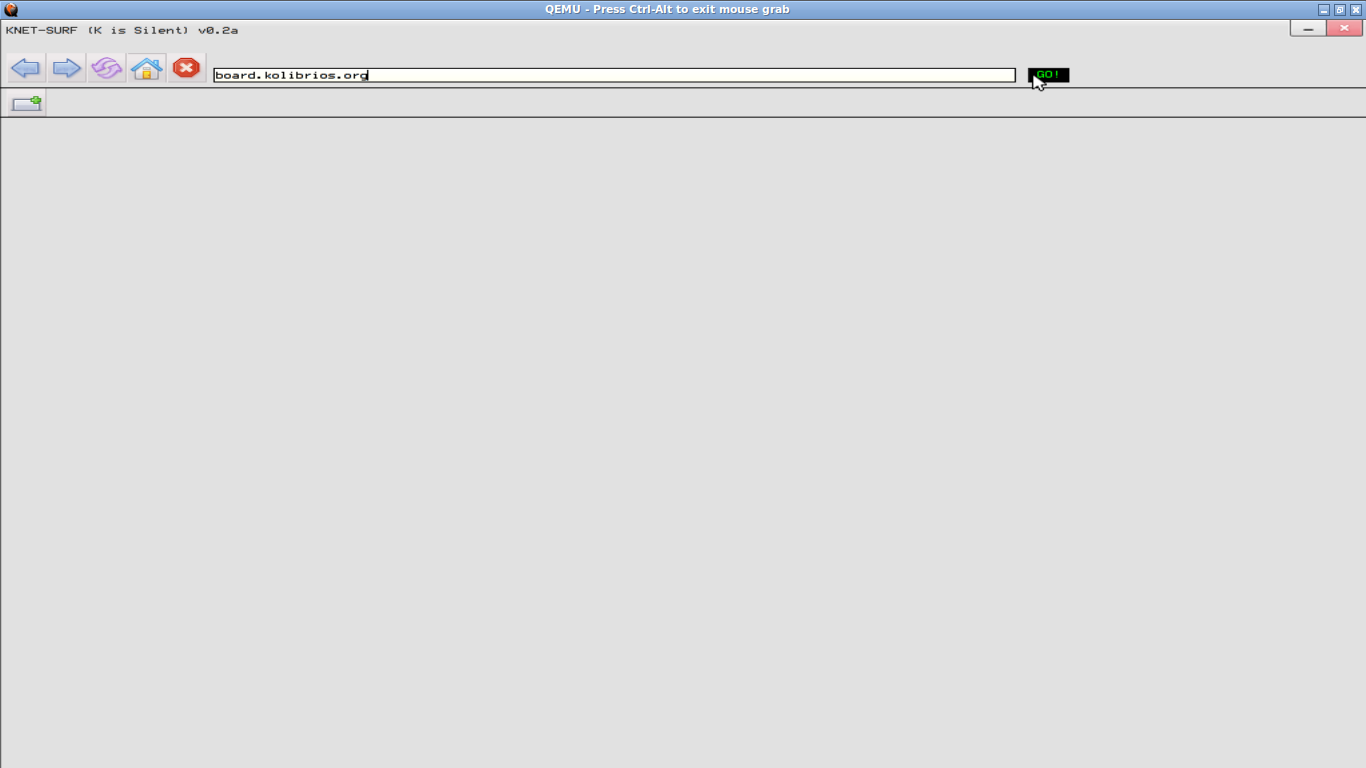 The GUI is made in FASM (gui.asm), and uses boxlib, libimg, libio and some system functions to draw. Feel free to hack around and make it look better

Also attaching the binary (nsgui) with this.

Also started writing the entry point in C for netsurf, attached the file which will contain the main() function for entry point from KolibriOS to Netsurf engine (gui.c) . The file currently contains skeleton definitions and function prototypes for all the functions we will require for mandatory features.

---
Check out the Netsurf Web Browser for KolibriOS.
Read the wiki and happy hacking with KolibriOS!
Top

Why do you use several png files instead one?
You can show one image with offset.
Sapiens dominabitur astris
Top

I'll use the single png with offsets in the next version. Was experimenting how the UI would look without a few buttons here and there so split the single PNG into multiple PNGs.
---
Check out the Netsurf Web Browser for KolibriOS.
Read the wiki and happy hacking with KolibriOS!
Top

Ashmew2: What Leency probably meant is that it's easy to splice the images in software, especially since they are all the same width and in a single column.
"Any intelligent fool can make things bigger, more complex, and more violent. It takes a touch of genius -- and a lot of courage -- to move in the opposite direction." Albert Einstein
Top

Thank you for the DEBUG LOG.
My suggestion is to use the binary that I uploaded a few months ago (in this same thread, the post where I mentioned about posting this from netsurf , followed by post from mario_r4).

That is the most stable binary I ever wrote.

Thank you for this clarification, this might be worth a try to actually determine what's causing this.
---
Check out the Netsurf Web Browser for KolibriOS.
Read the wiki and happy hacking with KolibriOS!
Top

It's been a long time, so here's an update on Netsurf's development. I've been writing some C level libraries / bindings for assembly code for the past few months / weeks and tried writing a cross compiler as well (but dropped in favour of Serge's already existing newlib based toolchain for now).

I created a kolibrios directory in Netsurf source.

Wrote a build script which builds all the libraries required by netsurf : Build Script
All libCURL related parts have been removed and stubbed.
All the functionality has been stubbed which is not supported by KolibriOS.
Removed some parts related to Linux / Windows not supported on KolibriOS.
Set up netsurf core tables according to KolibriOS frontend.
Wrote a kolibriOS specific make file for building netsurf for KolibriOS : Makefile.target

Migrate / Create some parts like kolibri_filesystem.c and kolibri_regex.c to expose functions used in most FOSS code but not available in KOS.

Problems / Current Status:
The main problem is understanding the Netsurf source code and how the functionality is split and decoupling core parts (as we do not have access to stuff that Linux/Windows have in terms of libraries)...but screw it : )

Getting stuff to build without a proper cross compiler is problematic. I'm trying to use the newlib toolchain (and Serge has been very helpful so far, Thank you!) but there are obvious problems along the way.
============

I guess this is it for now. If someone is interested in contributing to this, feel free to join this project. I've tried to keep the code base as clean as possible and as standard and Netsurf-compliant as possible till now so that we can put this port in Official Netsurf ports list.

Users browsing this forum: No registered users and 1 guest